A game produced by 10tons King Oddball is loosely a physics based destruction puzzle solver. It’s very reminiscent of Angry Birds with some little twists. Instead of a slingshot you play as King Oddball, a giant moon….. not a space station, and with your crazy long tongue you hurtle huge rocks at tanks, helicopters, and infantry. With the supplied rocks you must eliminate all of your opponents in order to pass the level. You’re able to use the environment to help as most levels have exploding boxes to help facilitate hitting multiple enemies with one rock.  If you can combo the destruction of 3 or more enemies then you can gain that rock back. 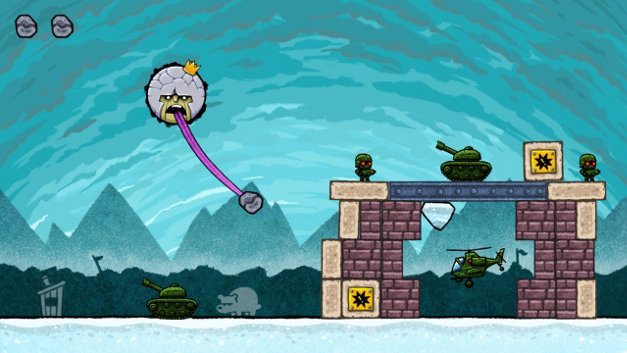 The delivery system for the rock’s destruction is where this game is unique and odd. As mentioned earlier the rock is hurled by King Oddball. He uses his tongue and swings the rock back and forth and the rock is released when you hit the button.

Each stage is presented to you in. A 4×4 grid that you uncover as you progress. If a level is pissing you off while playing you’re  able to “retreat” and try a new level as long as it’s not the last one within the stage. This avoids the typical pathway progression from becoming annoying and impassable. This is a nice change to many puzzle solvers that you’d typically find in a game of this type.

In addition to the clearing of stages King Oddball can take on extra challenges that are unlocked in each stage. Some are challenges which include using different projectiles, collects stats, race against time, or challenge of using less resources than you would receive in a typical progression level.

I loved my time playing King Oddball. If it catches enough traction it could probably as popular as some mobile titles that have exploded.

King Oddball is available on all platforms Mobile, PC, and Consoles. Prices range from Free – $4.99 depending upon your platform. (It’s free on Android currently)

Come check us out at Opencritic!

The Baldur’s Gate, Planescape: Torment, and Neverwinter Nights ALL Getting Enhanced Console Versions This Fall!

Airheart: Tales of Broken Wings Review
Be the first to comment!
Leave a reply »