Duet: Make Your Phone Even More Hypnotic and Distracting

I’m not usually one for mobile games, but Duet has kept my attention long past my usual tolerance. It’s something that I would classify (however poorly) as a mesmerizing dodger game. It is fairly reminiscent of The Impossible Game and I’m even getting some flashbacks from Thomas Was Alone. But even though it is reminding me of other games, it is still unlike any mobile game I’ve played.

Duet is simple; two dots, and blocks. The blocks are moving down the screen, and you must rotate the two dots together on a circle to dodge the blocks. It doesn’t seem like much from that description, but I assure you it is so much more. First of all, the soundtrack is hypnotic. Tim Shiel has done a tremendous job at making a soundtrack that is driving and repetitive, without being annoying. But the soundtrack isn’t all there is to the game; it is made whole by the narration and storyline.

You read correctly, this game of dots dodging blocks has a storyline. It’s really fascinating, actually. The game takes you through the stages of grief; ignorance, denial, anger, bargaining, guilt, depression, hope, and acceptance. We have Jojo Petrina narrating each level, in a fashion that is bringing to mind Scarlett Johansson as Kaa in the new Jungle Book movie. She has an interesting way of sounding encouraging and condescending all at the same time, especially through the guilt and depression stages. Her voice is very pleasant to hear and is like a cherry on top of this ice cream sundae of a game.

Gameplay is very simple. Touching the right side of the screen rotates the dots clockwise, touching the left side rotates them counterclockwise. As blocks fall down the screen, you rotate to dodge them. If you hit a block, the dot splatters, much like a paintball, and then “rewinds” you back to the beginning of the level. Even if you splatter on the very last block, you go back to the beginning. You either finish, or you don’t. It’s that simple. 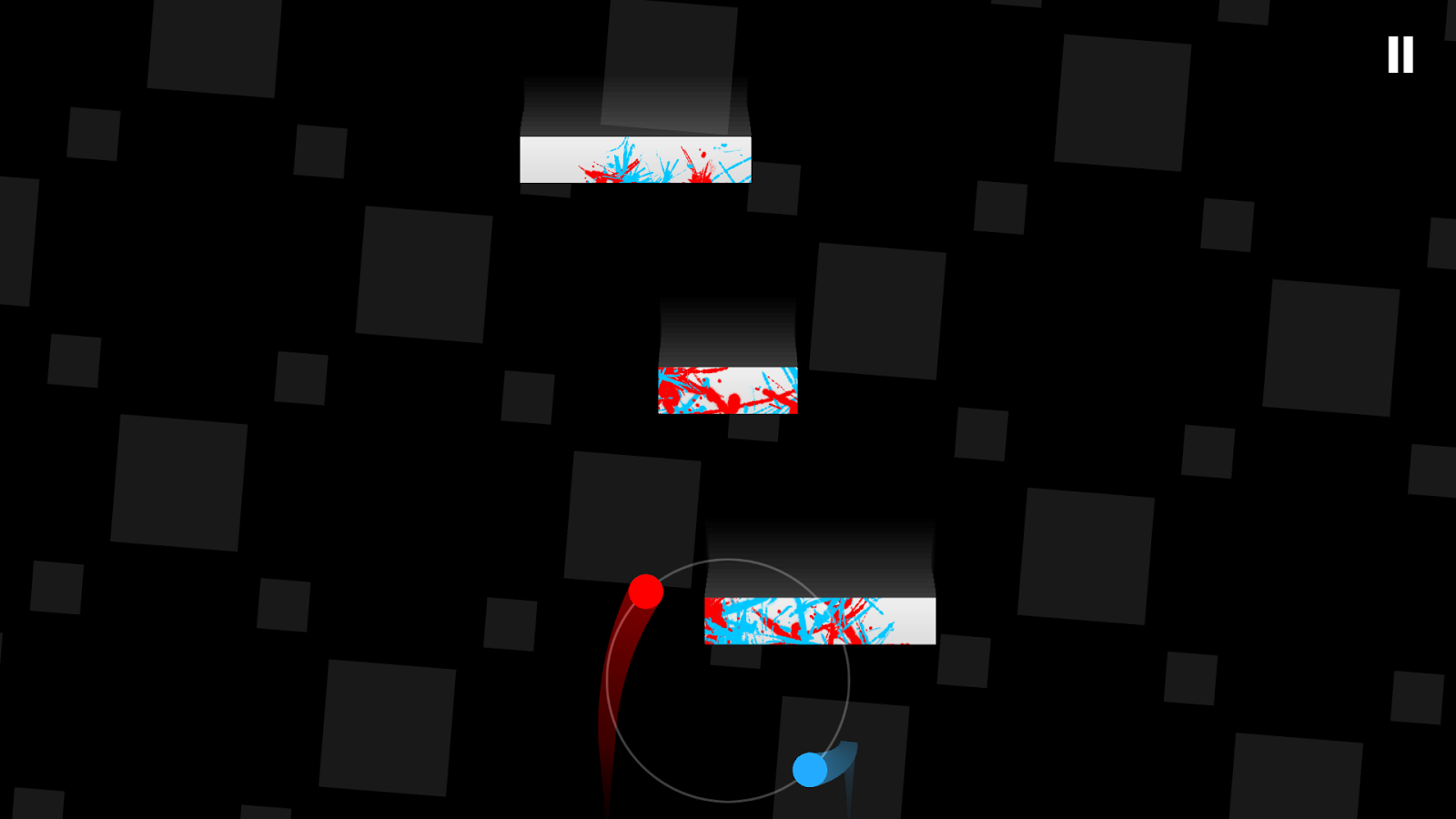 The narration tends to come together with the gameplay in a way that really messes with your head. At one point, we are told “to do something over and over and expect different results is madness” or something like that. As I played the level again and again, I found myself splattering the blocks at the same place almost every time. And what she said started getting to me; I’m not changing the way I’m playing but I’m messing up at the same place every time. Why is this happening? WHAT AM I DOING HERE??!!!?! *ahem* okay crisis over.

The only thing I could wish for this game, is to give me an easier option if I’ve lost a level more than 10 or 20 times. There were a few tough ones that I was stuck on for a good 10 minutes. I could only imagine the frustration that many other players may feel, and then stop playing because of it. But other than that… I can’t find anything I didn’t like about the game. I just couldn’t. I was thoroughly impressed by Duet, and have recommended it to a few people since I downloaded it. It’s a simple game to play to block everything out, which is kind of nice every once in awhile.

Get it on Google Play: https://play.google.com/store/apps/details?id=com.kumobius.android.duet

What do you think? Did you play Duet? Did the narrator get into your head, too? Let us know in the comments below!

No easier mode for challenging levels

If you need a mobile game to zone out to, this is it. It's fun and challenging, and it gets into your mind a little bit too. Which I consider a win with any game.

Editor/Collaborator/Woman -- Allie is GameOctane's newest addition and Nintendo Correspondent. She is a long-time game enthusiast and Disneyland fanatic. She can often be found glued to a 3DS and/or talking to her cat.
Be the first to comment!
Leave a reply »